HomeTravelTop 10 Things to Do in Bath, England
Travel

Top 10 Things to Do in Bath, England 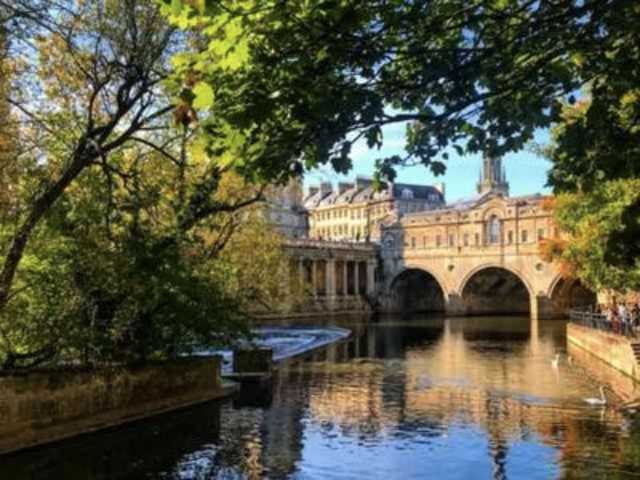 One of England’s most famous cities, Bath has a great mixture of things to see and do. From its honey-coloured Georgian buildings, museums and literary history, to its thermal spa waters and indulgent afternoon teas. Here are the top 10 things to do in Bath to get you started.

Top 10 Things to Do in Bath

Admire the architecture of the Royal Crescent

Bath’s most famous address, the Royal Crescent is a terrace of Georgian townhouses that curves around the edge of a perfect green lawn. Most of the buildings are private houses, though a couple in the centre has been turned into a hotel. But if you don’t feel like splashing out and staying there, you can take a look inside one at Number 1 Royal Crescent.

This house has been turned into a museum and restored to look like it would’ve done back in the 18th century, right down to the staff in period costumes.

Take a walking tour of the city

If you want to learn more about Bath’s history, the Mayor of Bath’s guides run a free two-hour walking tour around some of the city’s major sights. The tours run at 10.30 am and 2 pm every day except Saturdays. Or for a more irreverent take on Bath, you can join a Bizarre Bath Comedy Walk, with nightly 90-minute walks that are part guided tour, part street theatre and part improvisation.

At the heart of the city, Bath Abbey is the last Gothic church in England, built-in 1499 on the site of an old Norman cathedral. There are over 50 stained-glass windows inside and some impressive original stone carvings.

If you’re there on a Sunday night you can listen to the choir at 3.30 pm for evensong. Otherwise, you can take a tower tour and get a close-up view of the bells and a fantastic panorama across Bath, though you will need to climb up the tower’s 212 steps to get there.

Bath grew up around its thermal springs – they’re even in the city’s name ‘Bath Spa’. Around 2000 years ago the Romans built a complex of bathhouses and a temple to the goddess Minerva at the springs and the city rose up around them.

The baths were restored by the Victorians and you can still see some of the main pools and the Roman artefacts that were found there. But you can’t go into the waters here now and with a strange green colour, lead pipes and all sorts of bacteria you wouldn’t want to.

Soak in the spa

A much better way to try Bath’s waters is at the Thermae Bath Spa. This huge four-floor complex opened in 2006 and is the UK’s only natural thermal spa. You can choose from a range of massages and spa treatments, or just get a general entry ticket to use the steam rooms and thermal pools.

The most spectacular pool is the open-air one on the rooftop, where the glass walls give you a stunning view of the Abbey and across Bath while you soak.

Have tea in the Pump Rooms

The refined folk of Bath have been taking tea in the city’s Grand Pump Room since the 1790s, and you can still indulge in a champagne afternoon tea there today. Beneath grand chandeliers, you’re served sandwiches, cakes and scones.

There’s also a fountain in the Pump Room where you can try some of the water from the springs. It has over 40 different minerals and is rumoured to cure all sorts of illnesses. Though you might want to keep your cup of tea on hand to take away the metallic taste.

Bath’s version of Florence’s Ponte Vecchio, this covered bridge has slightly unromantic origins, being built by a local landowner who wanted to raise property prices over the other side of the river. It’s a pretty spot though and one of only a few bridges in the world that has shops built into the side of it.

Take a boat trip along the river

If all the walking around the city gets too much, you can take an open-top boat trip up the River Avon. The trip takes about an hour and leaves next to the Pulteney Bridge. After sailing under the bridge, you leave the city and pass by fields and bridges on the way up to Bathampton, where it stops in front of the mill before heading back into Bath.

One of Bath’s most famous residents, Jane Austen set two of her books – Northanger Abbey and Persuasion – in the city and lived there in the 1800s. So in September each year, Bath holds a nine-day festival to celebrate the author. Events include a costume parade, readings, concerts, workshops and a masked ball in the Pump Rooms.

If you can’t make it for the festival, there’s a Jane Austen Centre open all year with exhibits about her time in Bath.

If you’re interested in clothes, Bath’s Fashion Museum is well worth a visit. There are over 30,000 items in the collection, dating from the present day back to the 16th century, so you can get inspiration for your costume for the Jane Austen Festival and try on a corset or crinoline.

Back in the 20th century, there Was the Dress of the Year exhibit, where fashion experts have chosen an outfit each year since 1963, featuring iconic designs from the last 50 years.