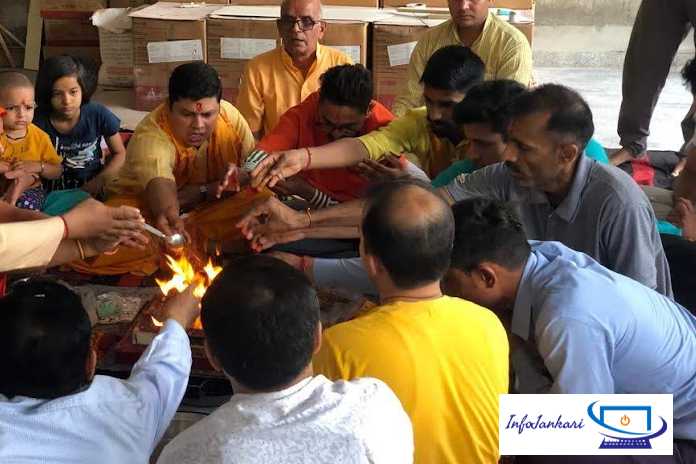 The Gayatri Mantra (Savitri Mantra) was first mentioned in the Rigveda, written in Sanskrit about 3,000 to 3,500 years ago.

The Gayatri Mantra consists of twenty-four syllables within a group of eight words. The original Gayatri Mantra, as given in the Rigveda, is different from what we hear today. It includes the following lines:

The original Gayatri Mantra is made up of three sets of three words each. There are 24 letters in this mantra. They have three steps of eight letters each.

The Gayatri mantra first appeared in the Rigveda (Mandala 3.62.10), an early Vedic text written between 1100 BCE and 1600 BCE. It is mentioned as an important ritual in the Upanishads and as a divine poem in the Bhagavad Gita. It is a belief that the chanting of Gayatri Mantra, firmly establishes the mind. If someone chants this mantra continuously and keeps on doing his deeds, then all his wishes are fulfilled and his life will be full of happiness. In short, the meaning of today’s popular mantra is:

Meaning: “O Divine Mother, our hearts are filled with darkness. Please remove this darkness from us and bring brightness to us. O Creator of the three worlds, may you awaken our intellect with your divine light and give us true knowledge.”

Bhargo – The removal of sins and ignorance;

Devasya – If God in the form of knowledge;

The Gayatri mantra is mentioned in the first verse of the Shrimad-Bhagavatam (1.1.1) as dhimahi. Since the Gayatri Mantra is specifically meant for the attainment of the Lord, it represents the Supreme Lord. Gayatri is considered to be the sound incarnation of Brahma.

According to Hari Bhakti Vilas, the Brahma-Gayatri Mantra is a prayer to Gayatri Devi, the eternal wife of Sri Vishnu. A devotee who meditates on Brahma-Gayatri is worshipping Goddess Gayatri and calling her to the heart from the planet Sun. This puja brings pity to the devotee and helps him to attain salvation and approach Lord Vishnu.

Gayatri Mantra is also a representative of Goddess Saraswati as she teaches the devotee to pray to the Supreme Lord.

According to Narada Pancharatra, “Gayati Ttrayate Iti Gayatri (गायती त्त्रयते इति गायत्री)”. This means that the Gayatri Mantra sings the glory of the Supreme Personality of Godhead and protects the devotee from all kinds of material troubles.

24 letters of the original Gayatri Mantra

Gayatri Mantra has 24 syllables. These 24 letters are symbols of twenty-four powers and accomplishments. These twenty-four letters are the best letters of the alphabet, and the pronunciation of each letter pleases Mother Saraswati and proves Mahavidya.

However, in the version that is recited today, the complete form of the mantra was formed by adding three Vyahrits (Bhur, Bhuvah, Svah) before these letters and the Pranava or Omkar before them:

The above three words (bhur, bhuvah, svah) of the Gayatri Mantra, which literally mean “past,” “present,” and “future,” are called Vyahritis. Vyhurti is the one who gives knowledge of the entire universe. From the earth the tamas guna (inertia, laziness, mental dullness and greed), from the bhuvah the rajas guna (passion, energy and activity), and from the self the sattva guna (light, knowledge and harmony).

Detailed meaning of the words of Gayatri Mantra:

Aum (Om) – Sacred Word. Om is also called Pranava Mantra because the sound of Om comes from the Vibration, which senses the universe. The scripture says “Om iti ek akshara brahma” (a word of Om is the whole Brahman in itself). It symbolizes the universal elemental sound.

Bhur – Bhur means existence. God Himself exists and is independent of all. He is immutable. The word Bhur also means ‘earth’ on which we were born. Bhur signifies prana or life.

Bhuvah – Bhuvah describes the complete consciousness of the Lord. It is related to God’s relationship with space. Bhuv: Indicator of the removal of all pain and suffering by the Lord. In simple words, it represents the sky in a subtle form.

Svah – Svah indicates the all-pervasive nature of the Lord. He is able to manifest himself through the physical world and is thus present in every physical entity. In a simple word, it represents heaven.

Tat – God. In simple Sanskrit translation, it means “that”. In Gayatri Mantra, Tat is used for (that) God, and it means that the praise being offered to the Lord is purely dedicated to Him, with no thought of any personal gain from that praise. Is.

Savitur – “Divine Sun” (the ultimate light of knowledge). He who gives birth, the power within the sun or the sun itself. The source of all things, God or the Creator. This word says that this universe exists through divine grace. The term describes the creation of the world by God, its upkeep (ability to sustain), as well as, at the right time, its dissolution.

Varenyam – One who is worthy to be worshipped (Worshipable). We accept Him as the supreme power and to that Lord, we dedicate our efforts, and actions.

Bhargo – Divine Light. Bhargo is a sign of the power of the Lord to purify and destroy all sins and offences. Divine Light, symbolizes the love and power of God. By realizing his divine form, we can purify ourselves by his grace and become holy.

Dhimahi – We focus deeply on God. We should be able to concentrate and direct our mental energies to the task at hand – which is communion with God.

Dhiyo – the intellect, the soul within the body. Having firmly established God in our hearts, we must now try to emphasize His presence and influence on our minds and intellect.

Nah – Us, ours. Nah is a symbol of selflessness of request to God in Gayatri Mantra. We make a request to God through this prayer not only for us but for the whole of humanity. We want the upliftment of the entire society.

Prachodayat – Publish. This word is a request to God, in which we ask Him for guidance and inspiration. May He (God) remove the darkness of Maya from our paths by His divine light (Bhargo), so that we may all be able to see the true cause of happiness and the source of true bliss.

Question 1. Why is Gayatri Mantra chanted?

It is believed that chanting Gayatri Mantra brings you success and happiness in your life. With the regular chanting of Gayatri Mantra, one can firmly establish and stabilize the mind. The mantra is a praise adoration, both for the nurturing sun and the divine power.

Question 2. Who is called Gayatri?

Question 3. What are the benefits of chanting Gayatri Mantra?

Question 4. When is the best time to chant Gayatri Mantra?

According to the Vedas, there are three qualities of time: Sattva (purity and knowledge), Raja (action and desires, passion) and Tama (ignorance and passivity).

The atmosphere is Rajasic from 8 am to 4 pm.

The atmosphere between 8 pm and 4 am is vengeful.

The best time to chant Gayatri Mantra is between 4 AM to 8 AM and 4 PM to 8 PM, having a sattvik quality.

There are many benefits of chanting the Gayatri Mantra. However, their chanting has a certain procedure. Thus, it is advised that people should follow certain rules while chanting Gayatri Mantra. While chanting Gayatri Mantra you should always close your eyes and try to focus on every word and understand its meaning. Every word or even sound must be spoken correctly. Although it can be chanted at any time of the day, it is suggested that it is better to chant the mantra, early in the morning and before going to sleep at night. After all, the mantra is an expression of gratitude to both the life-giving sun and the divine.