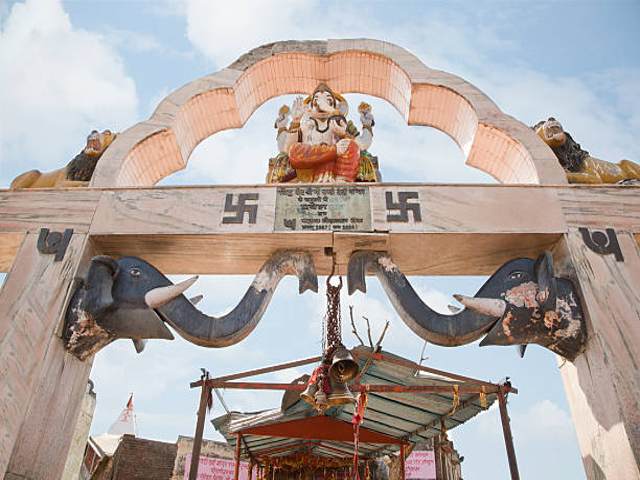 ‘Conversion’ is a dirty word in India at the moment. So, here’s a new word that’s making the rounds; it’s called ‘re-conversion’. And, its essential appendage is the Swastik temples. Swami Nischalananda, Shankaracharya of Govardhan Peetha, Puri, has come up with the novel idea of ‘Swastik temples’. The Shankaracharya states that the descendants of the Hindus who converted to Islam 400 years ago or Christianity in the post-independence period and who now desire to return to the Hindu fold, will be given a second chance to ‘reconvert’.

To avoid any confrontation over their use of temples, thousands of Swastik temples will be constructed across the country. The minimum cost of these Swastik temples would be Rs. 7,000 to Rs. 8,000. Special emphasis would be placed on reconverting tribes who have, over the years, been turning to Christianity. And, as for why the Swastik? The Swastik is regarded as the representative of Lord Ganesha. The small temples will carry the insignia of the Swastik. The Marriage dilemma While the Shankaracharya has stated publicly that the ‘reconverted’ shall have all the rights of ordinary Hindus, he has conceded that orthodox Hindus might have strong reservations about accepting the ‘reconverted’ on an equal basis. While general assimilation into the Hindu mainstream, does not appear to present a problem, the real difficulty will arise with the question of marriage. The seer has admitted that there are likely to be long-term social adjustment problems. Orthodox Hindus will be unwilling to marry into the families of the ‘reconverted’. In support of thorny issue is the famous example of Prithviraj Chauhan’s dynasty in Byabar (Rajasthan) where the ‘reconverted’ have not been accepted by the orthodox Hindus. Despite these deep-rooted problems, it would appear that the Shankaracharya is optimistic. He has stated that once the re-conversion process picks up steam, crores will ‘reconvert’ to Hinduism.

There has been strong opposition to the Puri Shankaracharya’s proposal to build separate Swastik temples of Lord Ganesha for the reconverts to Hinduism State.

The whole Swastik issue is also raising political hackles with the Congress Party against the concept of separate temples for reconverts. The Vishwa Hindu Parishad (VHP) and the state BJP administration in Orissa have come out strongly in support of the seer’s suggestion. The Puri Jagannath Temple is as of now steering clear of the debate, maintaining that it would abide by any decision taken by the highest religious bodies of the Hindu religion. What this decision will be, God alone knows!